Copy URL
I am Hashimoto, Sports Locally journalist (that’s what I call myself). Following my article on trying BMX, I am writing about sport climbing today. Like BMX, I cannot call sport climbing a major sport, yet, however, I want to break away this situation. I would like to introduce it as well as my story of trying it in Tottori Prefecture, which has its facility and there are top-ranked players.

Sport climbing has been added to the sports programme of the Tokyo 2020 Olympic Games that have been postponed to 2021. It has three disciplines; “bouldering”, “lead climbing” and “speed climbing”. Wall types vary depending on the discipline. You climb up the wall with your hands and feet. At Tokyo Olympic Games, these three disciplines (combined) will be included. For your information, it has been confirmed that sport climbing will be added to the sports programme of the Paris 2024 Olympic Games, however, it will be “bouldering & lead (combined)” and “speed”.

The place I visited was a world-class facility!!

I visited “Kurayoshi Sport Climbing Center (referred to below as “Kurayoshi SC Center”) in Kurayoshi City, Tottori Prefecture to try the sport and write an article. The place is part of “Kurayoshi Taiiku Bunka Kaikan”. When I visited the place, there was a banner of Mr. Tomoaki TAKATA, a sport climbing athlete born in Tottori Prefecture, at the front of the building. (The banner was to celebrate his victory in national sport climbing tournament, TOP OF TOP 2020. Mr. Tomoa NARASAKI and Mr. Kai HARADA, who are both taking part in the Tokyo 2020 Olympic Games, were participating in the tournament as well, but he beat both of them!!)
I was thinking of interviewing Mr. Takata if there was a chance but he was outside of the prefecture when I visited there, so it didn’t happen. However, I had a chance to ask him questions so I will write about it at the end of this article.

Kurayoshi SC Center is a special facility for sport climbing certified by JOC (Japanese Olympic Committee). As of September 2019, there are only three certified centres in Japan, and Kurayoshi SC Center was the first to be certified. (The other two are in Morioka City, Iwate Prefecture and Saijo City, Ehime Prefecture.) These facilities are usually improved for “National Sports Festival”, so it is a rare case that this place has all three kinds of walls for bouldering, lead climbing and speed climbing even though there is no plan that this prefecture is hosting it for now.

Major national / international events are held here, for example, bouldering youth national championship for 5 years in a row since 2015 and Asian championship in November 2018 which was the first time in 16 years to be held in Japan. This awesome facility is open to the public. When I was there for this coverage, there were people who came to try bouldering. As for lead climbing and speed climbing, beginners are asked to refrain from using the walls since it requires basic skills. So, you start with bouldering to practice climbing.

Bouldering is a sport that you climb up a wall using protrusions called “hold” set on 4-5 m tall wall, and you need to use the designated route to get to the goal. The holds come in various sizes and shapes, some are easy to hold, while some are not that you can put only some of your fingers. The degree of difficulty changes depending on the holds you use. You cannot use all the holds freely, the degree of difficulty is set by the colour of the holds. Multiple kinds of hold are attached to the wall in facilities that are open to the public so that people at various levels can enjoy, while only the holds needed to the task are attached on the wall at competitions.
You win or lose by the number of times you completed the set task, using the number of holds as little as possible.

It is essential for sport climbing to tense your toes so you wear shoes a lot smaller than your usual size. The shoes were tight and I had to curl my toes a bit, but it was bearable. The shoes are so tight that you wear them without socks, but according to Mr. Fukuda, many people wear socks nowadays.

Now, I try boudering for the first time in a while!!

Actually, I used to go bouldering several years ago. As it was the first time in a while I started with the beginner’s task, and it reminded me of the time I was doing bouldering. “Yes, it was like this.” The bouldering shoes in the picture above are mine, which I bought in the past. (You can rent shoes at the centre so don’t worry.)
I completed the beginner’s task no problem, so I skip the video of it. Next, I tried a more difficult task on an angled wall. (The wall is slightly tilted towards me.) Please watch the video of it.

As the wall is tilted, my body felt heavier compared to the beginner’s task. It was so hard to reach out the holds but I managed to complete, then I tried the next level. Please watch the video!
Well, it was so hard. It was very tough from the start, where I was only holding on to the holds with my hands and feet. I seriously thought that I would have to give up without taking even a step forward. I didn’t want to show my uncool side and managed to go close to the goal but my arms (especially the forearms) reached the limit and I couldn’t complete the task.

I tried the task twice later, taking breaks, but I couldn’t complete because my arms were too tired. While I was trying the task, I had no room in my mind to think about anything else. I was feeling torn, I wanted to reach out my hand to climb up but if I let go of the hold, I would fall.

I didn’t imagine that my arms would get this tired after trying bouldering only for several times. When I was doing bouldering several years ago, the facility was smaller than Kurayoshi SC Center, and we shared it with over ten people, so I never tried it several times in a row. I guess that’s why my muscle didn’t get this tired before. I do sports regularly, like tennis, but I realised again that we use different muscle depending on the sport we play.

Now, I want to show you a video of Mr. Fukuda demonstrating how to grab the holds from an athlete’s point of view!

How was the story of “Bouldering”, a kind of sport climbing?

The difficulty of bouldering changes drastically depending on the tilt of the wall and the task you choose. Just like the task I couldn’t complete, it is hard to start with an angled wall. I’m sure you can complete that task if you start with the beginner’s level.
The tasks for the tournaments like the athlete Mr. Takata would participate are much harder, well, from a beginner’s point of view, it’s nasty and I go “What’s going on!”.
There won’t be many chances you come across bouldering tournament, but there are videos on YouTube, you may find it fun!

I asked questions to a player, Mr. Takata!!!

Lastly, I would like to introduce you the reply from Mr. Takata answering my questions via e-mail, in the form of interview.

Me：Please tell me which association you belong to?
Mr. Takata：I belong to “Public Interest Incorporated Association, Tottori Prefecture Sports Association”.
Me：How often do you go back to Tottori Prefecture?
Mr. Takata：It depends on tournament schedule, I’m usually staying outside of Tottori to play at competitions and warm-up games.
Me：Where do you play in Tottori? (Apart from Kurayoshi SC Center)
Mr. Takata：Sometimes I go to “Tottori Chuo Ikuei High School”, the school I graduated from.
Me：How is the place Kuyayoshi for you?
Mr. Takata：It’s a comfortable place where I can relax when I come back.
Me：What is the attraction of sports climbing?
Mr. Takata：One is there are many moments where I feel a sense of accomplishment. Another thing is many things I thought through this sport work for my daily life.
Me：What is your biggest goal for now?
Mr. Takata：My goal hasn’t changed, it is to be a strong climber.
Me：About Paris Olympic Games, what do you have in your mind?
Mr. Takata：I want be prepared properly, and I’ll do my best to be selected for it.
Me：Are you participating in any competition soon?
Mr. Takata：Yes, Bouldering Japan Cup.
Me：Apart from practicing at sport climbing facility, what do you do? For example, cardio exercise, lifting the weights, etc.
Mr. Takata：I do them sometimes but I usually climb up.
Me：Any other sports you like besides sport climbing?
Mr. Takata：Nothing in particular. Basically, I’m not coordinated.
So I communicated with Mr. Takata as above. Basically, I used phrases that he wrote in e-mail as I thought it would show what he is like even for just a bit. I haven’t met Mr. Takata, yet but I thought he liked sport climbing very much as we exchanged e-mails this time. If I had a chance to see him, I’d like hear his story more.

That’s all for now about “Bouldering”.
The next issue is about “Lead / Speed Climbing”.
■Kurayoshi Sport Climbing Center
Address: 529-2, Yamane, Kurayoshi-Shi, Tottori-Ken, 682-0023 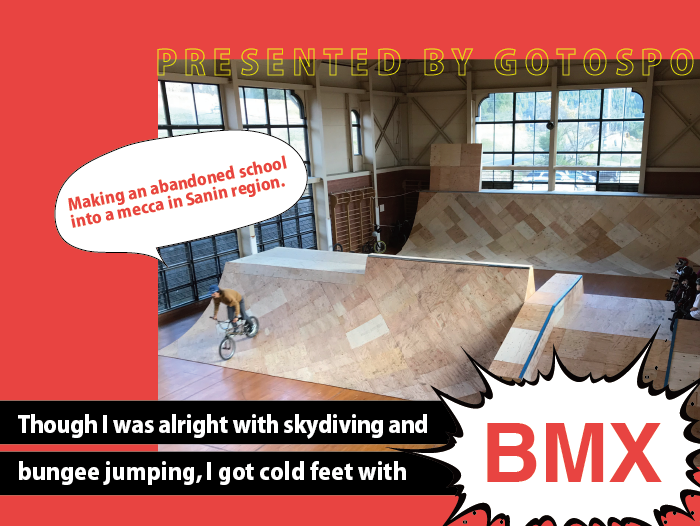 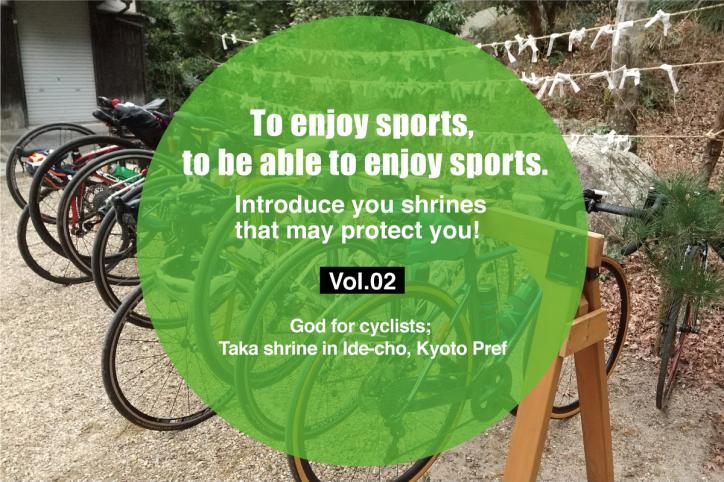 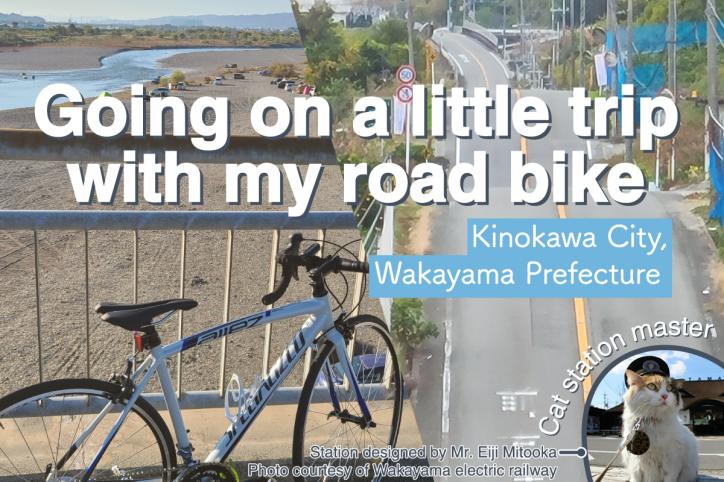 Going on a little trip with my road bike ～ Kinokawa City, Wakayama Prefecture

Located in the northern part of Wakayama…